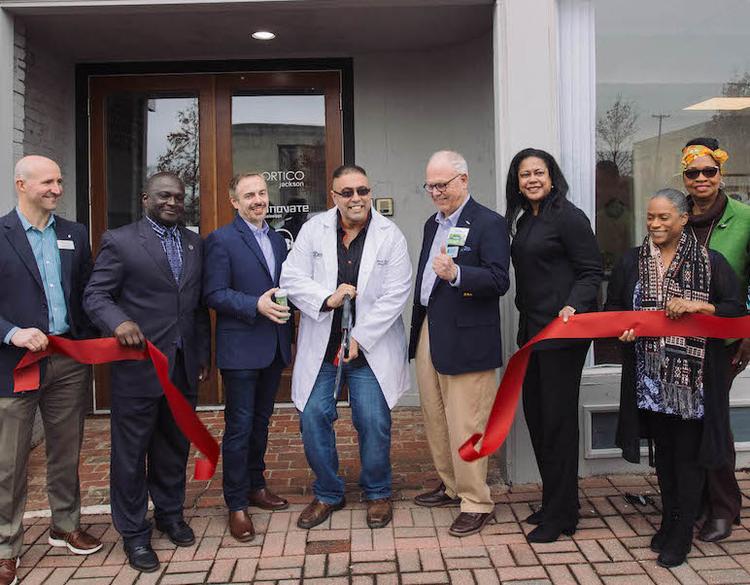 Bilal’s EasyKale officially launched on March 1, 2019, with a ribbon-cutting ceremony in downtown Jackson, Miss. in front of the offices of Innovate Mississippi.

“When I was studying for my master’s in medical sciences, I found that juiced curly kale selectively kills melanoma cancer cells in vitro while not affecting non-cancerous cells,” CEO Bilal Qizilbash said at the ceremony.

The cancer-fighting potential of kale is a major reason Qizilbash developed Bilal’s EasyKale.

The other reason is that leafy kale is tough to consume daily.

"People told me that they didn’t like the taste or texture of kale—that’s what eventually led me to develop the kale powder.”

Bilal’s EasyKale is 100% USDA-certified organic kale produced as a shake-on seasoning. With its lowered flavor profile, it can be added to smoothies, sauces, soups, dips and other foods without altering their taste, but still providing the benefits of pure kale.

“Our customers told us they wanted a USDA-certified organic product,” Bilal said. “So, we provided just that.”

The Bilal’s EasyKale shaker is priced at $14.99, offering the equivalent of over 60 cups of leafy kale at 25 cents a cup. It has a shelf life of over one year.

Bilal’s EasyKale is for sale on Amazon.com, is certified for Amazon Prime and offers the fast delivery times that are afforded by Amazon’s distribution network.

Bilal’s EasyKale is the direct result of Bilal’s passion for helping people and his success as a scientist.

His discovery that kale could be a important tool in the fight against cancer has caused him to work tirelessly to help people get more kale in their diets.

Bilal’s goal is to see many people adding this powerful disease-fighting food to their diets, and he is offering Bilal’s EasyKale as a convenient way for people to do that daily.

EasyKale Labs, LLC, is a triple-bottom-line corporation based in Jackson, Miss. At the direction of Qizilbash, the company earmarks five percent of net profits for two different causes—feeding the homeless (via the Draw-a-Smile Foundation) and educating a new generation of coders from at-risk backgrounds via the Mississippi Coding Academies. Learn more at www.easykale.com.