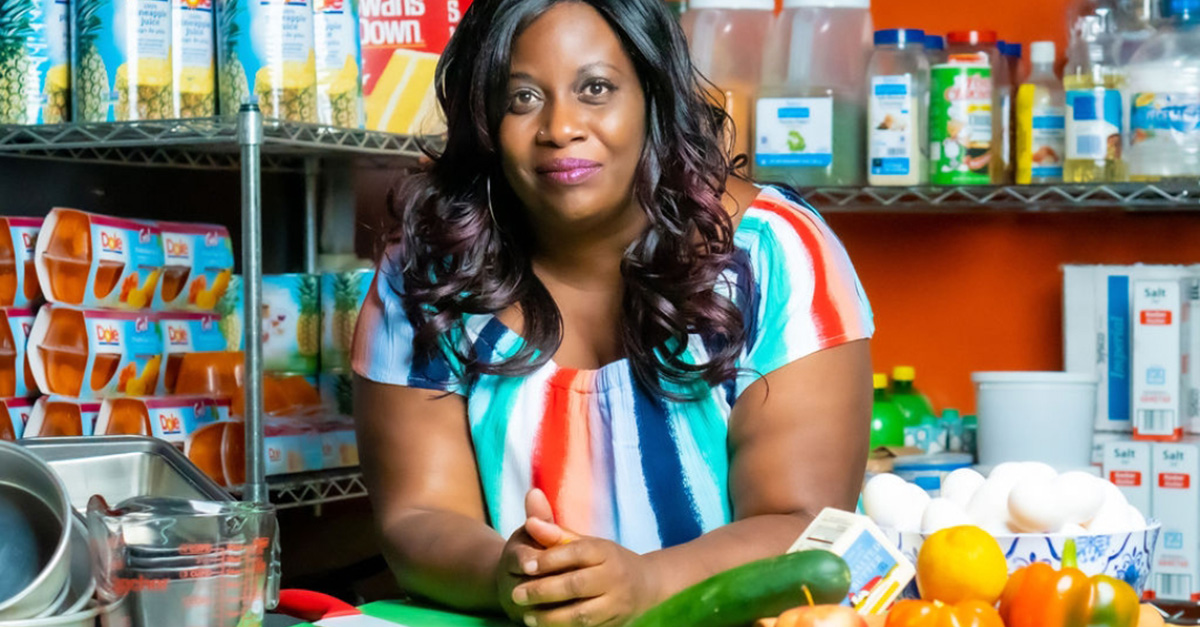 Regina Wallace decided to take a chance on herself and, boy, did it pay off.

Regina’s story begins in Springfield, Ohio, where she worked at a factory. This type of work was commonplace in Ohio as it sits in the heart of the Rust Belt.

Because of the decline of this industry and other circumstances out of her control, Regina was let go.

Although she didn’t know it at the time, this is exactly what Regina needed at this stage of her life. It’s funny how things have a way of working themselves out.

Even though she was out of work, Regina remained extremely optimistic. Though the next chapters of her story were a bit uncertain, Regina found joy in her newfound free time. This speaks to Regina’s resilience and overall positive outlook on life.

So, Regina turned to the kitchen, where she found joy in the sweetest of places - baking.

She picked up a cookbook on a whim and went on to make every single dessert mentioned. Her kitchen was constantly in a cloud of flour and sugar, colored by different frostings and other confectionery goodies.

Regina never had intentions of this becoming a business, let alone her next big move. She just really enjoyed baking. She wasn’t even selling the sweets she was making, she was simply giving them away. This brought her more happiness than making a profit.

While Regina would go on to find work as a paralegal, an insurance agent, and even starting her own cleaning business, she continued to bake in her spare time. These new jobs not only provided some means for Regina, it also helped fund her baking habit.

She was baking so much that her mother encouraged her to post her baked goods on Facebook Marketplace.

While Regina was reluctant at first, she claims her mother was adamant. So, to appease her mom, Regina posted her first cake on the online marketplace, a simple strawberry cake.

Within the hour a sweet-toothed someone had already reached out and just had to have the pretty pink pastry.

This is the exact moment that Heavenly Sweetz was born, Regina just didn’t know it yet.

Life had brought Regina to Mississippi. While Ohio was sad to see her go, Mississippi welcomed her with open arms. It is the hospitality state after all.

Mississippi also had no shortage of customers for Regina to serve.

She hit the ground running. 2015 saw great success for Regina as she had so many orders she couldn’t even manage them all. She was so busy, she couldn’t even make Thanksgiving and Christmas dinner for her family, which is one of Regina’s all-time favorite things to do.

She decided she wouldn’t let her business stand in the way of spending time with her family, so for the better part of 2016 Regina took on more of an administrative and student role so she could really learn the ins and outs of the baking industry.

While the selling of her desserts took a bit of backseat, Regina never stopped baking. In fact, she began learning how to properly decorate her cakes. She started teaching herself the basic fundamentals of baking and decorating. She also began dabbling in fondants. This is where Regina’s creations really started to take on a more artistic approach. Not only were her desserts sweet to the taste, they were just as sweet on the eyes.

Now she was ready to bring the business back up to full speed. So, she started marketing herself through Facebook again and, in no time, her business grew quickly.

Regina even met with a small business consultant so she could take her hobby to the next level.

Regina set up a small kitchen space at an incubator in Midtown Jackson called The Hatch. This is where she would meet EasyKale’s very own Bilal. Bilal even asked Regina if she could incorporate EasyKale into her desserts. More to come on this.

Even though things were going extremely well Regina decided she wanted to retire altogether. She found herself working all the time, alone, and with too many orders to manage by herself. She was overwhelmed. Baking wasn’t fun anymore. She needed a break. So, in January of 2020, she stopped baking.

Regina’s retirement would be short-lived, because orders kept coming, even during the COVID-19 pandemic. So, she returned to baking and even added homemade bread to her menu.

Word of Regina’s homemade bread made its way to Bilal. As it turns out, Bilal was actually in need of some help in the kitchen.

Now this is where the story gets wild.

It’s no secret that Bilal is passionate about feeding the hungry and does his best to help when an opportunity arises.

With the help of the Draw a Smile Foundation and the R U Hungry Program, Bilal and team help feed the hungry every Friday at 6 p.m. in downtown Jackson.

These efforts attracted the likes of Dole. Yep, the fruit and vegetable juggernaut, Dole.

Dole decided to launch an initiative to help fight the obesity problem in Jackson. The initiative was simple - to eat healthy by choosing healthier entrees.

Dole approached Bilal about possibly teaming up and, of course, Bilal saw this as a no-brainer.

Through the new partnership with Dole, Bilal remembered his old pal Regina and asked her to help lead the initiative. This was a huge undertaking. One that Regina jumped at because she cared about her community. There’s no better way to serve others than by combining passion and talent.

With the help of Dole, Regina began cooking meals for the Boys & Girls Club of Jackson. To date, she and her team have fed 500 families.

In the meantime, Regina was still running Heavenly Sweetz, which had grown into a flourishing business.

Needless to say, she was a busy woman!

As mentioned earlier in this story, Bilal asked if Regina could use EasyKale in her sweets and, of course, she obliged. Remember, that's how this friendship began in 2019. Regina had started baking EasyKale into desserts for Bilal.

This has also led to Regina being able to introduce healthy alternatives into her sweets. This is something that parents have really grown to love because the EasyKale in the sweets is virtually tasteless! So, kids are getting their greens by eating cookies and brownies! Regina also makes salsa and pound cake with EasyKale.

Regina continues to work alongside the Boys & Girls Clubs and Dole, and Heavenly Sweetz is still running like a well-oiled machine.

“I love baking. I feel extremely honored and grateful to share what I love with others. This is my ultimate giveback,” says Regina.

Heavenly Sweetz is still the only company that uses EasyKale directly in their products.

We are extremely grateful for Regina, her story, and her willingness to serve. Her passion is inspiring and we are happy to have her as a friend here at EasyKale.

Interested in learning more about Heavenly Sweetz? Visit the bakery online to browse Regina's beautiful desserts or even place an order if you're local to the Jackson, Mississippi metro area.